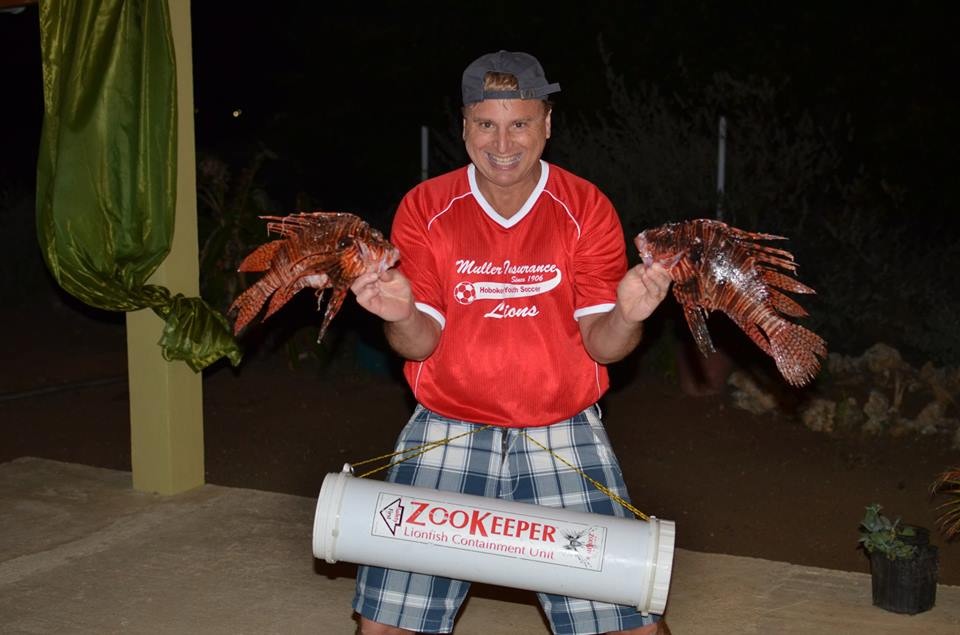 (HOBOKEN, NJ) Scarier than anything Hollywood could dream up, the predatory lionfish (Pterois miles and P. volitans) feeds from sun-up to sundown, and can eat prey up to half its body weight. Lionfish consume commercially, recreationally, and ecologically important species; and dense lionfish populations can devour more than 460,000 fish per acre, per year. On heavily invaded sites, lionfish have reduced fish populations by up to 90 percent and continue to consume the Atlantic Ocean’s native fish at unsustainable rates.

In an attempt to eradicate, or at least decrease the growing lionfish population in the Atlantic Ocean – where the lionfish has no predators to keep it from over-populating– the National Atmospheric and Oceanic Association (NOAA) along with other groups and independent scuba divers have taken on the mission to hunt down the lionfish before it takes too big a bite out of the Atlantic’s fish habitats and ecosystems.

The red lionfish has white, red, brown and black stripes with dark spots on its orange fins. A favorite among aquarium owners for its colors and “plumage”, the lionfish is the peacock of fish with 18 spines that fan out like quills – only the quills shoot venom into its victims, which can deter predators and cause mild to serious stings and reactions in people.

Roger J. Muller, Jr. of Hoboken felt the sting of the lionfish first-hand. A member of the Hudson River Fishing Association, a NAUI and PADI certified Dive Master-Instructor with 84 certifications including two in lionfish hunting, Muller has traveled to Panama, Central America, Cuba, Aruba and Bonaire to spear lionfish – and during one of his dives, his hand was pierced by a spine.

“I read about lionfish and I’ve seen them off the coasts of the Turks and Caicos Islands below the Bahamas,” Muller says. “I saw giant lionfish atop reefs. They’re really pretty, I thought. When I learned the problem lionfish are causing, I decided to apply my degree in Environmental Science by eliminating lionfish around the world. Little did I know I’d get stung.”

Memorial Day weekend he got the itch to hunt lionfish, he says. He flew from New York to Panama, rented a boat and dove with members of Scuba Panama, the dive shop in Panama City.

“I was about to put a fish I speared into the ZooKeeper containment unit, but the current was rough and I put my hand on top of the unit to steady it and stabbed myself in the finger on one of the lionfish spines,” Muller says. “I’m down 50 feet and within two minutes my hand was so swollen the thumb joint was locked.”

Muller called a member of the Divers Alert Network and they transferred him to one of their doctors. He was told to soak it in hot water.

“I was using the coffeemaker in my hotel room, soaking my hand in the boiling water,” Muller says.

A FISH IN HOT WATER

Lionfish are native to sub-tropical and tropical regions from southern Japan and southern Korea to the east coasts of Australia, Indonesia, Micronesia, and French Polynesia, and in the South Pacific. As they multiply, they move to new locations to feed and now lionfish are found along the East Coast in Florida, North Carolina, Bermuda, the Bahamas, the Caribbean, the Turks and Caicos Islands, Aruba, Bonaire and Mexico. Every four days a female lionfish can release 10,000-30,000 eggs; that’s 2 million eggs a year.

James A. Morris, Jr., Ph.D. is an ecologist and lionfish expert for NOAA. He says the biggest areas of concern for lionfish invasions are the Caribbean Islands because they are very dependent on the coral reefs, which are a big part of their economy. But it’s hard to say which locations have the worst impact because the invasion is still spreading.

“Overfishing has occurred and been occurring for the last century,” Morris says, “and now a predator is taking up the space and diet of the reef that was once occupied by the native species. How will this predator in our native reefs impact on its ability to recover snapper and grouper that have been over-harvested. We may not be able to return or restore native species because lionfish are there.”

If the Lionfish problem can’t be fixed, the invasion is likely to get worse in the next 5-10 years, Morris says. The over-population will eventually peak; it’s just difficult to say when.

“At some point the population becomes limited either with space or with some competing relationships; it’s just really hard to predict,” Morris says.

PUT ANOTHER LIONFISH ON THE BAR-B

Spearing the lionfish is how hunters catch the lionfish during their expeditions. Some lionfish associations host spearfishing derbies and award prizes for the most lionfish caught. Another way to get people involved in eradicating the lionfish, according to NOAA, is to promote how tasty the lionfish is when served with lemon, or breaded, fried and doused in hot sauce. Creating a food market demand for the lionfish and promoting it as a tasty delicacy can add impetus to fishermen to go after the spiny fish, decrease its numbers and make money.

“Lionfish, is a really good fish to eat and many years ago we released information suggesting lionfish could be used as a food fish,” Morris says. “It’s not a new concept; it was going to happen anyway. One of the realities is that you need to control lionfish. We can’t control this invasion locally with armies of volunteers, that’s way too expansive, but harvesting them is much better as a long term strategy. It has really taken off. Harvesting lionfish has become a big part of local fisheries.”

Ali ElHage who designed The Zookeeper, the lionfish containment unit used for collecting the fish, is a member of Team Zookeeper, a lionfish elimination team that in one year, eliminated 12,000 lionfish in Curacao. Allie ElHage cooks the lionfish he spears.

“I make pan-seared lionfish, or ceviche,” ElHage says. “Yesterday, I filleted them for dinner. They’re a white meaty fish, very high in Omega 3 and low in mercury. It’s somewhat of a healthy fish to eat.”

Norman Arends, a scuba instructor in Aruba takes divers on Lionfish Safaris and the lionfish he catches, he sells at market. Muller, who caught 22 lionfish on one of Arends’ safaris says the lionfish is very tasty.

“It’s really meaty and with no fishy taste,” Muller says. “When Norman first starting selling the lionfish, people were reluctant to buy it. So he started giving away free samples and a year and a half later, he’s selling out at the farmers market. He uses the spines as toothpicks.”

There are many diving associations recruiting members interested in joining the cause to eradicate lionfish. If you’re interested, check out these resources: